The Mate 20 pro. Similar looking camera to the iPhone 11s’

Its been nearly 2 years since Apple drastically changed the iPhone. Back then It had put its best foot forward and stepped straight into the future. For the first time in nearly 4 years, Apple had changed the shape of its main release. iPhone X was a huge step in the right direction for Apple. With solid upgrades to its camera and actual screen, the difference between the previous iPhones and the new ones were staggering. Now almost two years later Apple is under huge pressure to deliver. Especially after Samsung and Huawei have just taken their phones to the next level.

Samsung has recently released the S10, S10 Plus, s10e and the s105G. The s10 5G is a monster of a phone. A bezel-less display, a huge battery, a 6.7” display and most importantly its 5G. One of the first 5G phones on the market. The first Samsung one in-fact. Huawei has released the p30 series and the pro has a camera with 30x zoom. That’s crazy. They have just released the mate 20 X 5G and are well and truly on par with the new industry standards. Then there’s Apple. Oh, deary me things are just looking boring for the short term.

After their Phone release, last year Apple consumers were unimpressed by the lack of upgrades. I mean they cloned the iPhone X, added a new colour and said this one is faster with a slightly better camera. Although it may have been a minor upgrade I still think it was a waste. The way they discontinued the iPhone X suggests that they only had to do it because it’s very similar to the iPhone XS. Apple would have had to decrease the price of the iPhone X and that would have meant people would have leaned more towards buying the iPhone X rather than the new one. After all, they’re pretty much the same thing, right? The ultimate question is… “the iPhone 11 stick or twist?”

This year the iPhone will follow the same trend as the previous two iPhones. Same 5.8” OLED display and that ever boring notch. Everyone seems to have moved on from the notch except Apple. After taking that one huge step forward they now seem stuck in the mud. So what’s the point of upgrading you may ask. Well to be quite frank if you have an iPhone X, XS or XSmax there is no need for an urgent upgrade (unless your phone is falling apart).

Apple is working on a very exciting iPhone for 2020. A 5G one in fact. It’s supposed to have no notch (yes no notch…AT LAST!) and a couple of rumors are suggesting we might be seeing a redesign. Finally a new shape! Some leakers are suggesting that there will be three new sizes. A change from the 5.8”,6.5” and 6.1” iPhones released in 2018. Although these three sizes will still be apart of this years new iPhones, next year the fun shall hopefully begin. 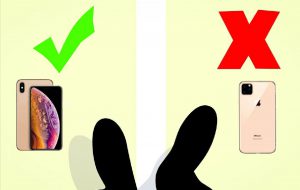 The choice is yours.

What’s even more exciting about the 2020 iPhone is that industry insiders have found a patent for the return of touch ID. Might Apple be getting ready to ditch the face ID? Three years in and Apple may be returning to what was left behind. Touch ID is the future of the smartphone? Are we going in circles? If its full-screen finger scanning I think Apple may be onto a winner.

So finally is upgrading to the 2019 iPhone worth it? Is it time to stick or twist? If your phone is falling apart then I can’t argue. But what’s for sure is Apple has plans. Be patient. You will not regret it. The 2020 iPhone is the one to look out for. Hold out. You’ll thank me later.